The doll face Persian cats are royalty since they were pets by the nobility. Their captivating beauty catches every eye.

They are quite different from slender cats like the sleek Siamese or the Egyptian Mau. Persians are cobby with short legs and heavy bodies.

They are not athletic by nature, but they make up for that with their grace and elegance. Once you’ve held a Persian, you’ll know what it’s truly like to cuddle. Persian cats for sale in Hyderabad, Bangalore, Kolkata, Delhi and Maharashtra.

Personality:
The Persian is usually described as a quiet cat. Generally placid in nature, it adapts quite well to home life. This cat would have mood swings, as you would find her sleeping under the sun in no time it would explode into running around the room and rolling around.

The Persian will stretch out next to you, sleep in your bed, and sit on your lap when she is in the mood. She does not mind changes in routine and is generally friendly with anyone and everyone. Persians are calm and have a sweet temper. Persian white cats for sale in Mumbai.
They admire human attention and are very social beings perhaps that makes them the most popular breed of cats amongst people.

Fast facts:
Persians are calm and would not annoy you with constant meowing.
Persian is one of the favorite cats of French nobility.
The average life expectancy of the Persian cat is 12 years.
The 2001 movie Cats & Dogs features a diabolical Persian named Kitty Galore. Also, a species of Pokemon is named after the Persian.

History:
The first Persian known to have been brought to Europe arrived there in 1626 courtesy of Italian world traveler Pietro Della Valle. Here’s how he described them: “There is in Persia a cat of the figure and form of our ordinary ones but definitely more beautiful in the luster and color of its coat. It is of a blue-gray and soft and shining as silk. The tail is of great length and covered with hair six inches long.”
More than 200 years later, Persians were favorites of pet-loving Queen Victoria, which made them popular with everyone else, too. They were first imported into the United States in the late 19th century, where they were equally popular. Through selective breeding, their appearance has changed dramatically over the decades, giving them a rounder head, flatter face, and chubby cheeks, but their popularity remains high. 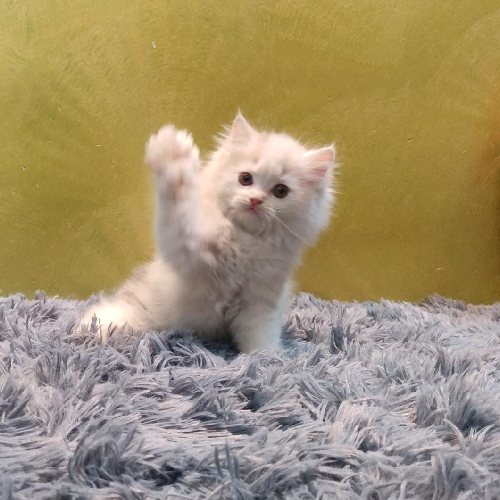